A downloadable game for Windows and Linux

The Sargosian Abyss is a challenging retro fantasy roguelike where you explore a procedurally generated dungeon and battle dangerous enemies using turn-based tactical combat. This is the free addition of the game, which contains all levels, but does not include customizable difficulty or the two additional bonus classes (Druid and Sword Saint).

You control a party of four unfortunate souls who have been cast into the Sargosian Abyss as a sacrifice to the goddess of chaos. Armed with little more than crude weapons, you must guide your party as they battle the vile creatures that inhabit the ever-changing labyrinth. You must use caution when exploring, as once your party is wiped out, you must start again from the beginning of the dungeon.

The game consists of 10 randomly generated levels, each filled with different monsters and items. You must carefully manage your party's resources as they explore the abyss and engage in tactical turn based combat with the dungeon's denizens.

Please report any issues to esturiasupport@protonmail.com.

I played it for the first time today and won on my first try! (Although there were several close calls--especially the ending). Really polished game and a lot of fun!

If you'll permit me a suggestion or two, it would be nice to be able to see the attacks available to enemies so that your first foray into new rooms is not a: "am I about to get AOE'd to death without warning?" kind of experience (looking at you, fire level). It doesn't have to be exhaustive info, even just knowing the attacks' names would probably give enough of a hint as whether to expect melee vs ranged or AOE. If that demystifies things or is too hand-holdy, maybe have a consumable or spell so it costs a turn? Or maybe some of the shrines will give you tips on enemy abilities?

This isn't too big a deal in the grand scheme of things. As I said, I was able to get through it my first attempt because the revives, pots, and firewood were plentiful enough to cushion some hard lessons learned.

I'd also maybe suggest some more in-depth tooltips? It was not immediately clear to me how the armor/weapon + elemental damage worked (whether it was upon taking damage or dealing it, and whether it synergized to stack the same element type).

These are minor points on an otherwise very streamlined and mechanically satisfying game. I plan on buying the steam version and trying out the new classes/perma death!

You are the first person I know of who won on their first try. I'm impressed! Providing information on enemy skills is a really good suggestion. It's a feature that I considered, but I didn't have time to implement it properly before the release. You are also probably correct on the elemental damage documentation, as several players have been confused by how those work. In-game documentation is something I should really try to improve for my next game. Thanks so much for playing my game and providing such excellent feedback!

Yeah I totally understand time constraints. Honestly it stemmed from a "never knew I wanted/needed it until I had it" experience with a game called Riftwizard, a turn-based roguelike with documented and telegraphed enemy attacks. Into The Breach does a very similar thing. Their model only works if the enemies pre-commit to their actions though, which may not be how your AI functions.

Anyways, like I said, great game! Look forward to whatever comes next!

Very cool game!  I find it very easy to get into.  Most games like this tend to start off with a big learning curve, but this one lets you hop right in.

I tried the "use" healing spell, and it seems to crash the game to desktop each time.  One of my characters died in the first fight - maybe that is a factor.

During combat the heal spell worked fine, but outside of combat it seems to crash each time.

Thanks for playing my game and for the kind words. I was able to reproduce the crash, so I will fix it right away.

The crash should be fixed now. Thanks so much for finding it. By the way, I've been really looking forward to Islands of the Caliph.

Fantastic!  That was fast :) 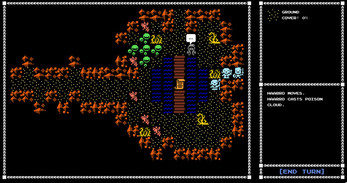 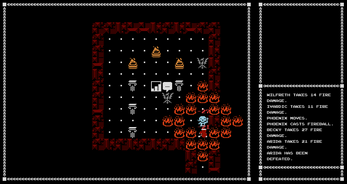 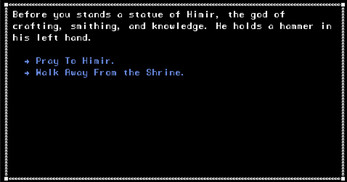 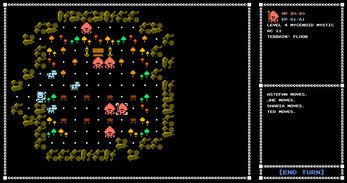 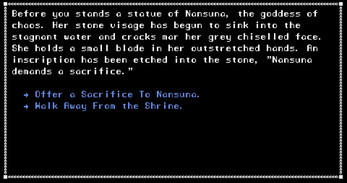 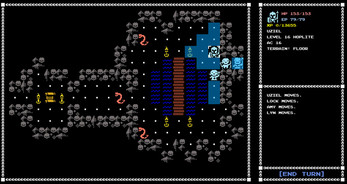